It seems a bit better overall for normal planets, but for the large ones it goes a bit off. Check out Reorte at low altitude for an example.

Edit: With a quick experiment, a cosThreshold value of 0.08 at Reorte seems pretty ok. That should cover also most of the rest of the large planets. 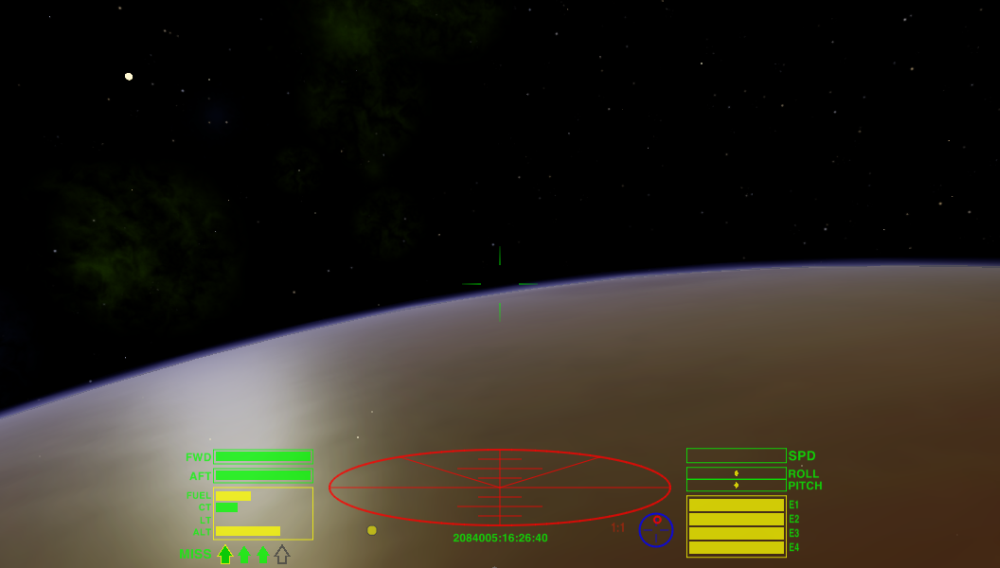 I'm getting a similar look with:

Seems to work well with different sizes.
"With our thoughts, we make the world"

I think I got this one that looks good for the three sizes I tried: Ra, Lave and Reorte. You can try giving it a go if you want:

For anyone not following, a crude explanation according to my understanding.

The first part of the calculation (that gets multiplied to atmRadius) scales the relationship of atmosphere to planet size, which is why a rough and ready / 10 modifier worked, because a_c had already scaled it for planets 10 times smaller (i.e. default sizes). The second part (again, crudely speaking) sets the baseline of where we are scaling from (a starting point). Too high and the atmosphere lies mostly within the planet radius, too low and you lose the subtle haze effect you can see in some of the pictures. So if the first value is close enough to be functional (i.e. reflects change in planet size) then there's some room to fine tune with the second for the look you want.

Although the haze looks really good, there's something to be said for a higher visible atmosphere (esp. at increased planet sizes) and so I tried lower values added to atmRadius with...

which predictably restored some of the cloudiness (less like a glass ceiling) but did little for the reduced fading.
"With our thoughts, we make the world"

another_commander wrote: ↑
Mon May 18, 2020 10:59 am
I think that releasing a binary would go a long way to enabling more extensive testing. Just a zip file with the oolite.app and AddOns folders should be all that is needed.

Fair enough, I'll give that a go.

Yeah, that would be great as I haven't managed yet to compile Oolite on my system (Slackware Linux with Plasma 5).

<I tried to PM, but it seems the system is a bit off for now -- sorry for the noise here>
As a fellow Slackware user, we can try to work this out. Maybe open a thread to follow on your issues.
Top

Seems to work well. Here it is at Ontiat (a little bigger than Reorte) 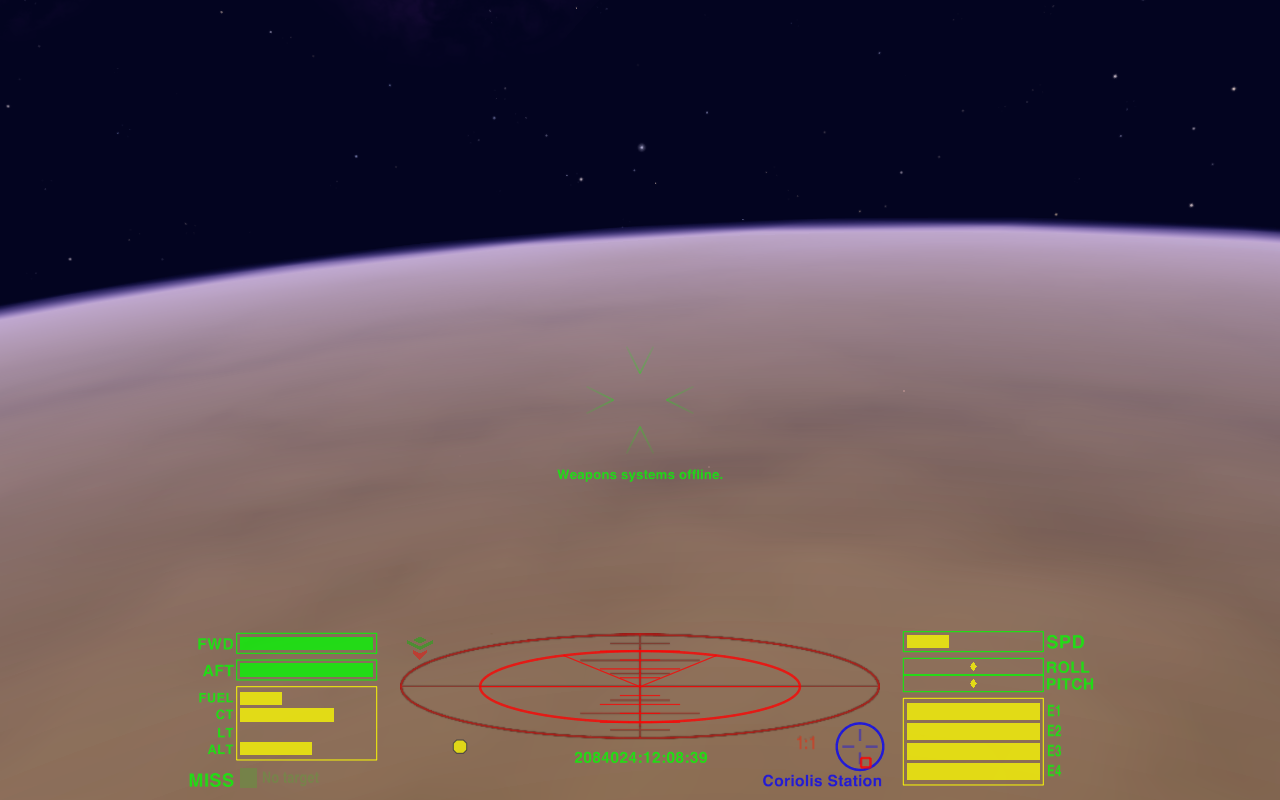 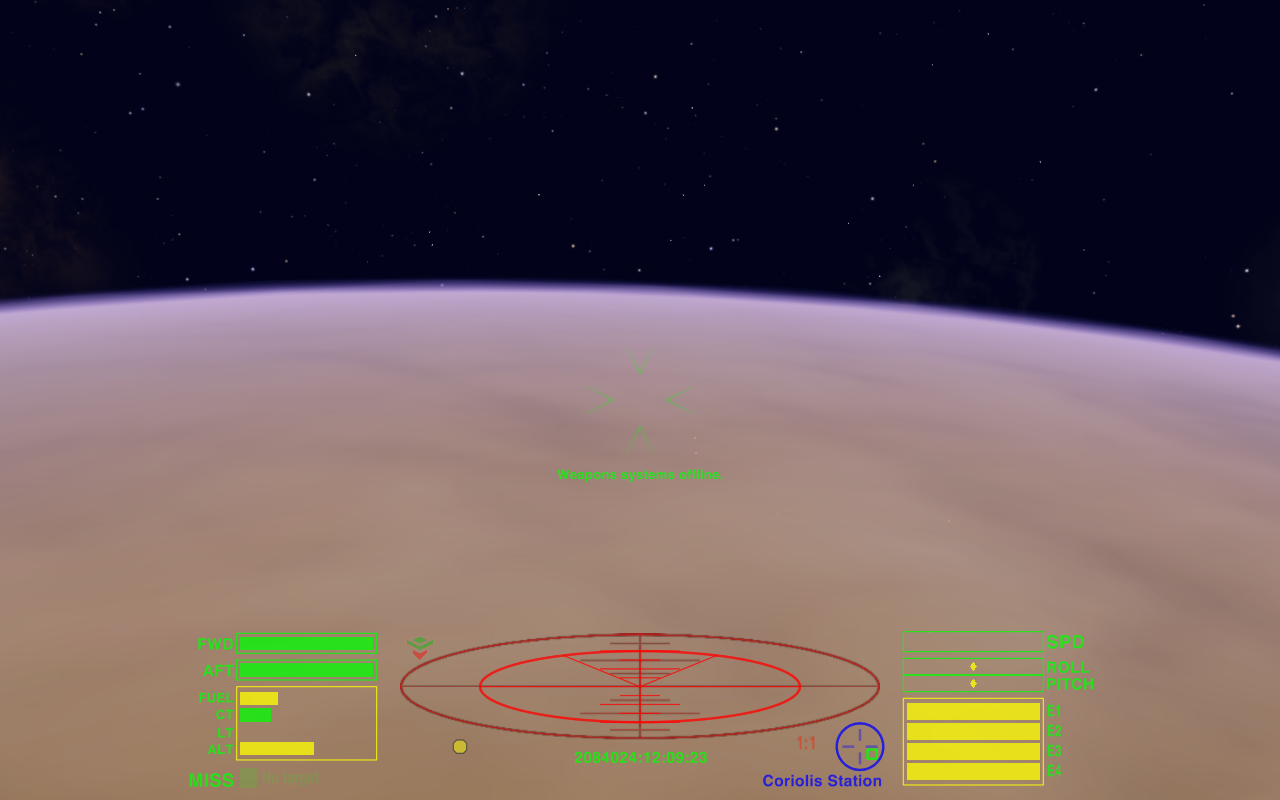 Both are captured at the point where atmospheric friction requires slowing down. Second image has a slightly larger reach I think (which I like) but here's the tradeoff... 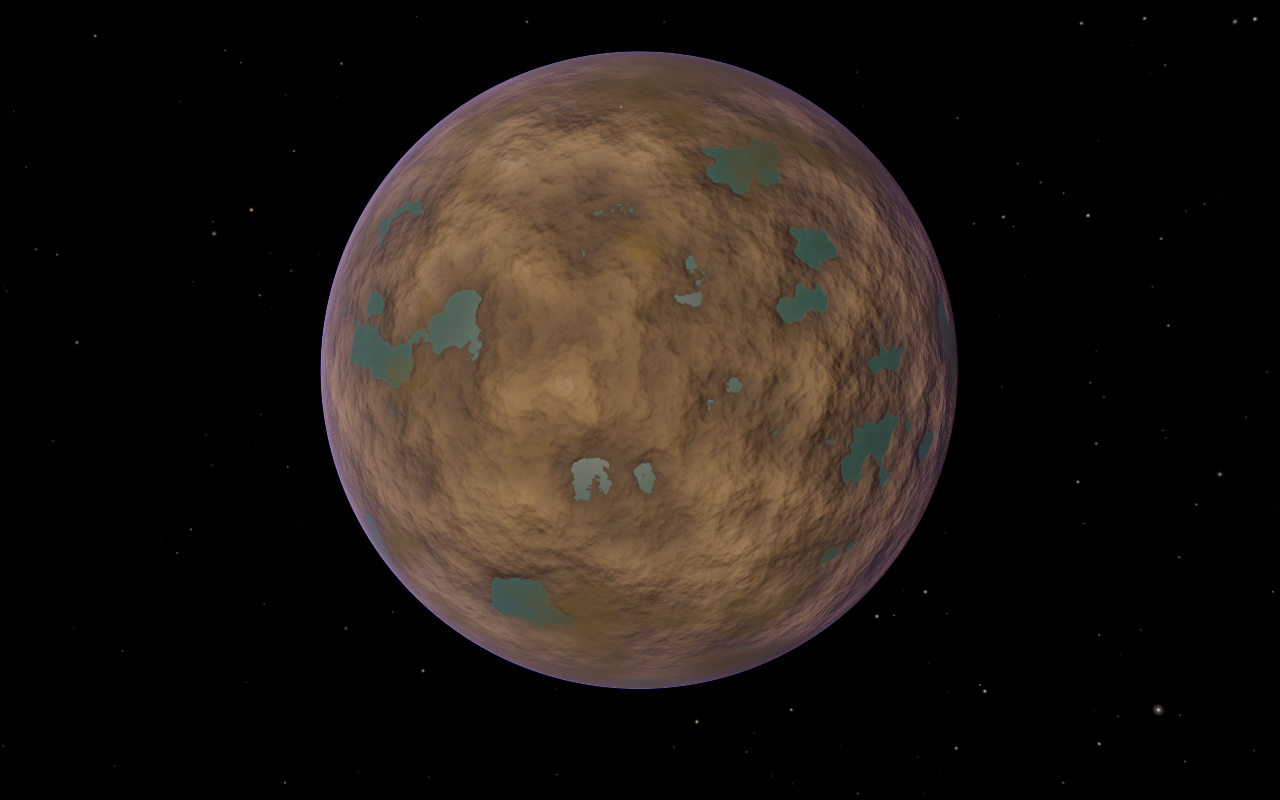 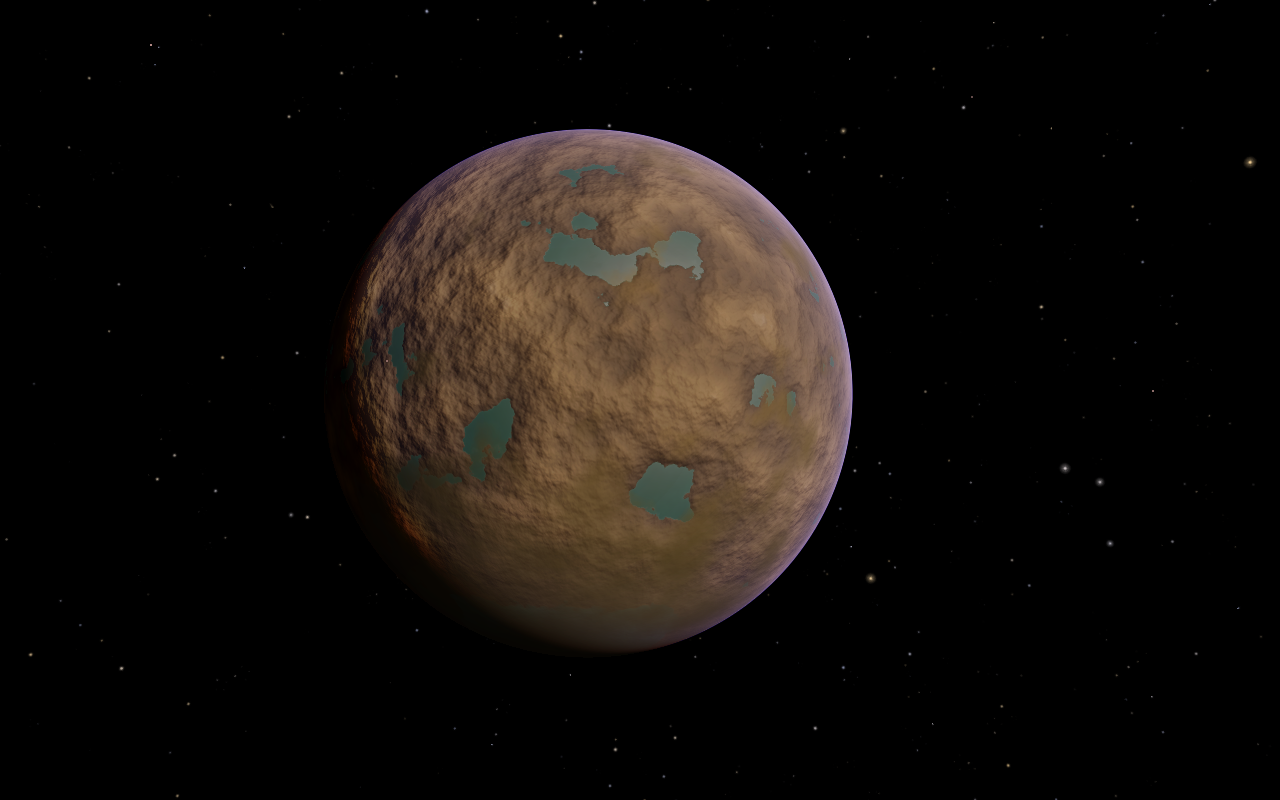 Not the clearest comparison, so apologies for that, but the haze seems to be a little more confined to the planet 'edge' with my fomula (second pic).

In any case, I think the 'problem' is essentially fixed.
"With our thoughts, we make the world"

And at the other end of the scale...

Ra this time, again with: 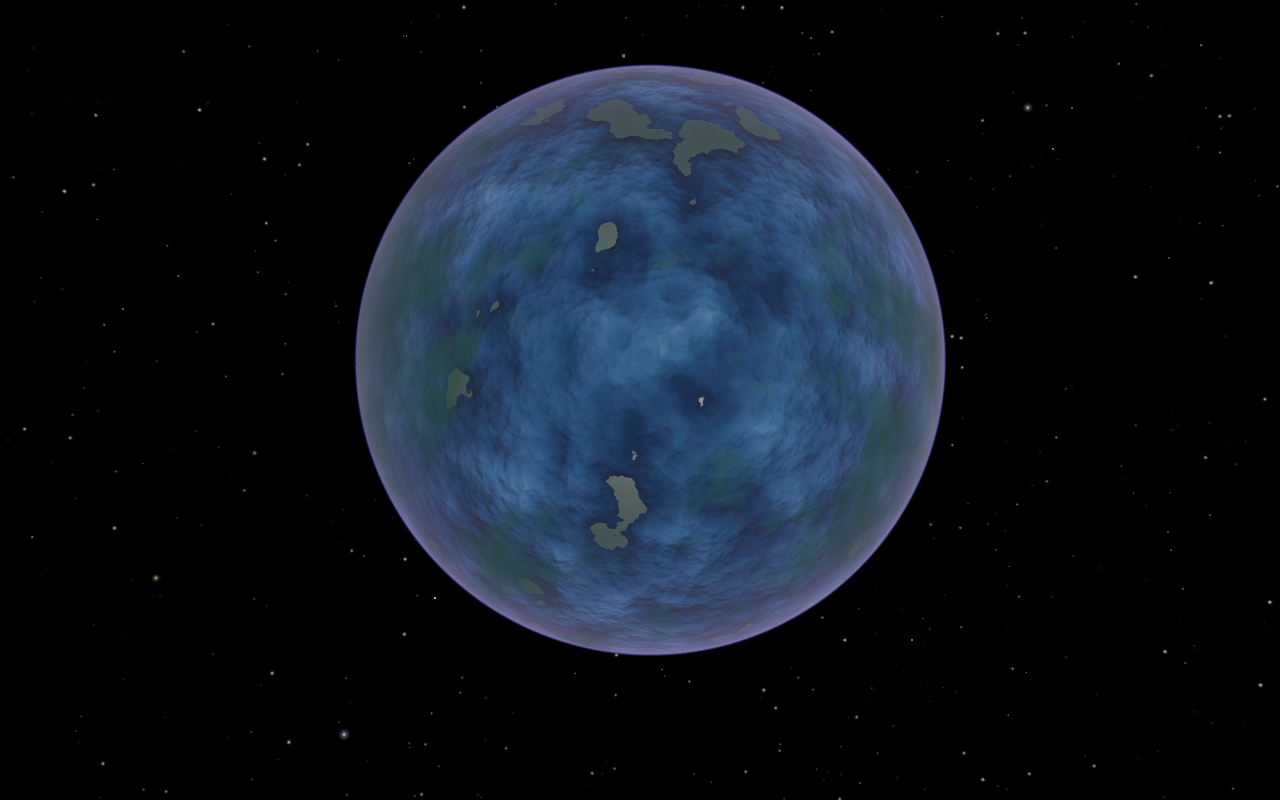 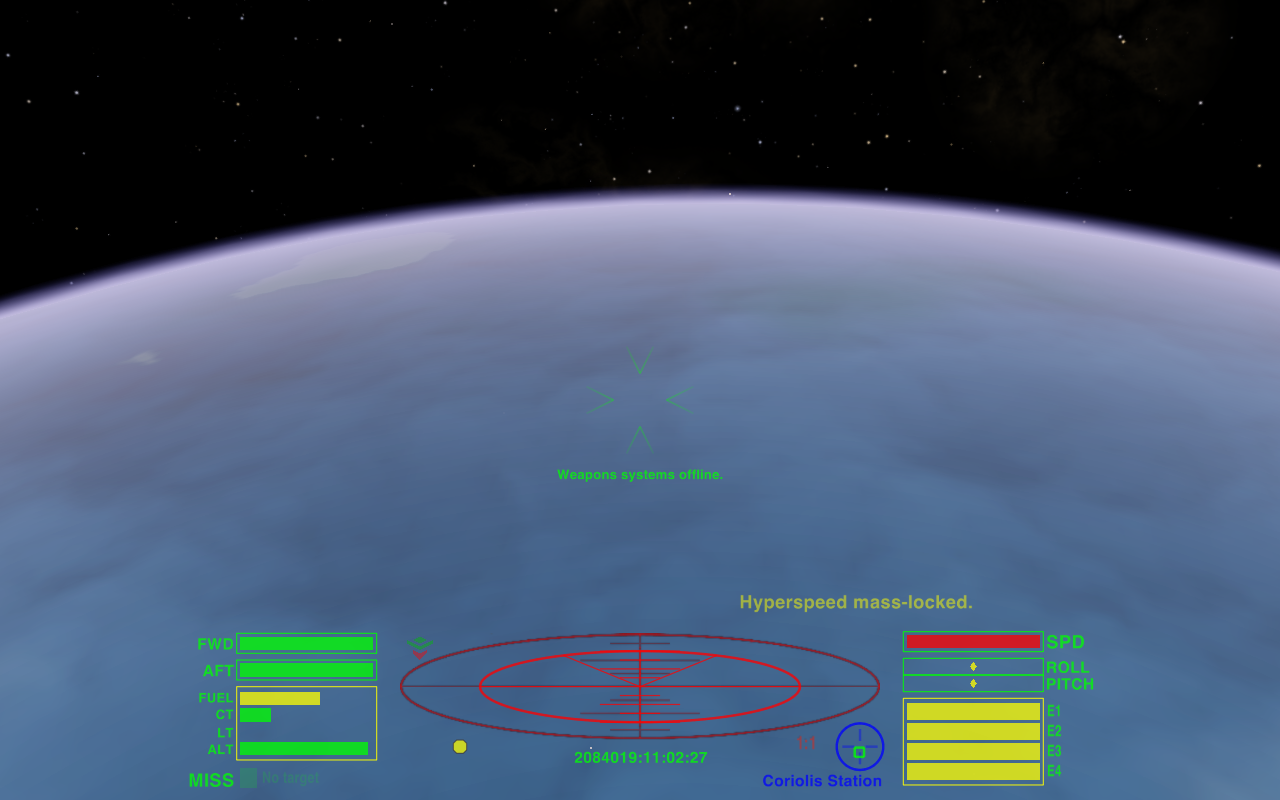 I could spend ages tweaking this but I think that's a pretty good consistency among planet sizes.
If a problem presents itself in future then I'll look at it again.
"With our thoughts, we make the world"

Quick question -- is the sun expected to have the size like in the another_commander's screenshot below ?

Not in my build.
"With our thoughts, we make the world"

Strange, either "Modest" or "Plus" oxp dropped over a self-build (nightly) show that type of sun.
Top

That's the size you get without either of the the oxps being active.

Could you please check that whichever one you're using is unzipped and placed in the addons folder with an .oxp extension (obvious I know but...) Then please check planetinfo.plist is included and each reference of 'sun radius =' has been preceeded by '//'.

Without that, what you get is the default sun sizes, which are approximately 10 times too small (one can argue about the distance of course but certainly they're too small without the change).

I was under the impression that including planetinfo.plist would overwrite the default version? If not you could always cut and paste...
"With our thoughts, we make the world"

Ah yes, that makes perfect sense.
The oxp doesn't define sun radius and so it defaults to the preset values...

Looks like I'll have to include it as a core change.
"With our thoughts, we make the world"

It's a big file so I don't know holong my bandwidth limits will hold up for...
"With our thoughts, we make the world"