another_commander wrote:Many of the screenies there by Cody and myself show Povray + new atmospheres.

A Povray gas giant (which somehow found its way into interstellar space) without an atmosphere:

Which leads me to a question I asked a while back: should gas giants have an atmosphere effect?
Give me five, I'm still alive
Ain't no luck, I learned to duck
Top

technically speaking i think they should.
even a gas giant wont have a defining line of where the "gas" ends and space begins. just like any planet they will thin out as you get further from the centre of the planet.
earths atmosphere doesnt just end, it thins out to vacuum . only on planets without an atmosphere would you see a definite edge between planet surface and space.

but this is a game so do whatever you think looks right to you...lol
Arthur: OK. Leave this to me. I'm British. I know how to queue.
OR i could go with
Arthur Dent: I always said there was something fundamentally wrong with the universe.
or simply
42
Top

spud42 wrote:but this is a game so do whatever you think looks right to you

I do - all my gas giants have atmospheres disabled. Thing is, rockies have a clear line where atmosphere meets surface, but gas giants don't.
Give me five, I'm still alive
Ain't no luck, I learned to duck
Top

The way I see this solved would be to provide a dedicated "gas giant" shader that can be plugged in by the OX[PZ]s (and being unused by the core game, unless some gas giant look would be drafted later). I guess such a shader should look like in the following screenshots from Blender (it should resemble a bit the way the stars/suns are presented in Oolite, without their rays, of course).
This is the look and the color ramp (a bit more complicated than the one in-game) for the atmosphere shader:

These should be the corresponding counterparts for a "gas giant" shader (maybe a bit exaggerated for a better picture):

The gas giant still won't have the atmosphere (of course, a big percentage of its radius *is* the atmosphere) but it would still have shader fading at "the end of its circle".
I'm not sure to what extent this can be done without touching the Obj-C code.
Top

<nods> I went through the Povray textures and disabled Oolite's clouds on all gas giants (191) in the planetinfo.plist - atmospheres came next.
Give me five, I'm still alive
Ain't no luck, I learned to duck
Top

<nods> I went through the Povray textures and disabled Oolite's clouds on all gas giants (191) in the planetinfo.plist - atmospheres came next.

<grins> Quite likely!
Give me five, I'm still alive
Ain't no luck, I learned to duck
Top

... and here's a quick in-game hack of a "gas giant" called Isinor

Couple of comments:
- the landing/close flying issue I've mentioned (with the nice blues skies) doesn't come up due to has_atmosphere = false, thus no sky
- this is nothing more than a quick hack (all the planets would have this shader) -- it's actually the original shader I used when I'd shown this capability sometimes back, changing the "atmosphere" color to black
- it's not really doing transparency, as the planet/material shader doesn't have this (I guess transparency will need Obj-C intervention), just fading to black (this can be seen on the left side of the picture, where there is a nebula with the slight same tint like the planet, but has a sharp black edge between its lower margin and the planet)
Top

Wooo - 322 pages of screenshots. Perhaps this topic need a bit of sub-topicing - e.g. "planets", "spacecraft" ....
Anyway, Anyone seen one of these before? 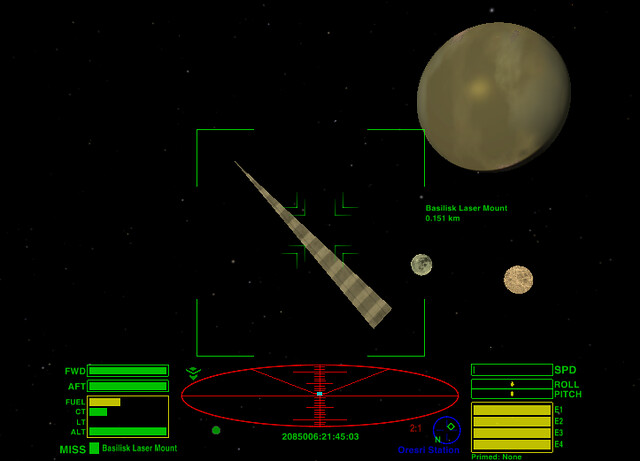 Attacked by a Basilisk, I start shooting chunks off it, as you do. Boom goes a drive pod. Boom - a second. Boom, an inert lump comes off. Boom another drive pod. Gibbering and pleas for mercy from the pilot before the military laser in the back of the head moment. Go back for the metal plate, but it's not a plate, it's a "Basilisk Laser Mount" - and I'm wondering what the experience and profit margin for swallowing it is going to be. As the actress said to the bishop, "I've never seen one that size before! Or that shape at the end." (Referring to his hat. Filthy boy!)
Will I get, ummm, spiked? Shafted through the fuel scoop? A BFG-9000? Chocolate? Or just lots and lots of €?
--
Shooting aliens for fun and ... well more fun.
"I'm just stepping out of the airlock for a breath of fresh vacuum. I may be gone some time."
Top

It's been a long time since I posted here, but this name made me chuckle so I thought I'd share it. That's CAPTAIN Sensible to you, groundling!
(Complete with tiny sun glasses and a red beret. 1970s survivors only need apply.)
--
Shooting aliens for fun and ... well more fun.
"I'm just stepping out of the airlock for a breath of fresh vacuum. I may be gone some time."
Top

Two images from the rescaling experiment.

Boa with Cobra Mk I escort (cobra to left of planet).

Sidewinder passes in front of the station (top right pentagon).

Note the python still on the scanner above

Note the huge area that the asteroid occupies on the scanner (at 1:1 rather than with any zoom enabled).


And there are asteroids bigger than that one (a 'huge' class) much, much bigger even that a main station and yet they can disappear in the vastness of system space.
"With our thoughts, we make the world"

Trim the "Development version..." text and that second one is box-cover art.

- - - Game too slow for you? Masslock Compensators - - - Trouble getting out of trouble? Indestructible Injectors
Top
Post Reply
5729 posts