Re: Elite: Dangerous - and the return

Cody wrote:Go to sea in an unnamed ship? Not bloody likely!

In relation to which, I've noticed with interest the one or two occasions you've renamed a ship.. (not as in - new ship, new name, but renaming an existing craft). I trust you took all necessary and proper precautions, and also conducted both the de-naming and re-naming ceremonies in the correct manner? Poseidon isn't exactly noted for being lenient about such things.
Most games have some sort of paddling-pool-and-water-wings beginning to ease you in: Oolite takes the rather more Darwinian approach of heaving you straight into the ocean, often with a brick or two in your pockets for luck. ~ Disembodied
Top

Absolutely - all due ceremony was meticulously observed. Spindrifter is my Cobra's current name - Poseidon approved!
Truth is the daughter of time
Top

Re: Elite: Dangerous - and ship naming

Yodeebe wrote:Wow, lots of unhappy people!
I feel the urge to stick my hand up & say how great I think ED4 is.
I 'get' all the comments, but I've found it all utterly immersive, and great fun, despite getting seriously splatted last night, with hundreds of tonnes of high value cargo, and some very VIP passengers on board

It was always said how difficult it was to create a game with newt-onion physics, but to me it seems like Frontier have done a great job on the balance of 'reality' vs gameplay.

Graphics - A*
planetary landings - A*
Minor factions & background sim - A*
Multi-ships & equipment / weight / space balance - A*
Wings (flying with your mates) would be good, if I had any mates

Powerplay & major powers - hmm, not so interesting, although I'm enjoying being anti-power. Any attempts to expand anywhere near 'my' systems get vigorously sabotaged, which is getting very difficult right now, what with the new player superpower landing right next to 'my' bit!

Ship names? really? it doesn't take much imagination to give your ship a name!

Game extras - all completely cosmetic & have no real in-game effect, so why not get a few squids off those who can afford it?

Oolite is still the best Elite 1, a different game, and a unique opportunity for people to design their own universes, AND (very important) a great way to start learning programming, imo.

I love them both.

I have to agree with you.... ED is not perfect but I am having a good time.... some changes that were made that I personally like:
a friend who is sharing the instance with you now shows up as a green icon with the commanders name showing.
The NPCs now interdict less frequently and the majority of the npcs are within 1 or 2 levels of your combat skill... doesn't mean they are easier to handle but they are not so deadly anymore... I have a fighting chance to escape.
There are new internal views of the stations that are quite interesting. the stations are now identified as high tech, agricultural, etc.
The station controllers are more demanding of you as you exit the station... "get out and don't loiter"
approaching neutron and white stars is definitely more risky... gotta respect them now.
prices actually fluctuate making trading more of a challenge.... example: sold 200 tons of gold at 1200/ton..... came back for a repeat and gold was at 500/ton. I have inadvertendly(sp) overstocked the station causing a glut on the market.
Just got my Elite status in exploring and now am working on trading but I still explore when I can.
players are able to identify their ships through local comms... and it is working.. associate the ship to the commander and the ship has its name being used.
Sure it isn't splattered all over the outside of the ship but who knows... it just might happen. Just as people have cracked the HUD colors.. somebody will find a way to put names on hulls...like on my anaconda.. I would like to put the name where the word 'anaconda' appears on the front hull....someday....someday(looking at the far horizon)
Bartle tester says while I am drinking evil juice, I am: 80% killer/ 80 % achiever/ 33% explorer and 0% socializer.
Top

OK..
2 people see the good in ED.... sn no further retorts or discussions.... where are all the whiners and naysayers???????? Possibly lurking around ED and finding out that it really is quite a good experience? bwaa hahahahahahahahahah just gotta love it.
Bartle tester says while I am drinking evil juice, I am: 80% killer/ 80 % achiever/ 33% explorer and 0% socializer.
Top

After years of waiting, a player of the Elite Dangerous game seems to have encountered its mysterious aliens ... a massive, flower-shaped organic craft

Vid here.
Truth is the daughter of time
Top

Something of the jellyfish about it, methinks.
Truth is the daughter of time
Top

It got me wondering where Oolite got the idea of putting Thargoids inbetween systems?
Was it from an ealier Elite game? or Elite fiction?

My wing companion got pulled out of hyperspace yesterday.
Quite difficult to make a storyline that can be inclusive of as many players as possible, I imagine.
Good start!

Yodeebe wrote:It got me wondering where Oolite got the idea of putting Thargoids inbetween systems?
Was it from an ealier Elite game? or Elite fiction?

It was all in the original Elite's manual, which had this to say about Thargoids:

The Space Traders' Flight Training Manual wrote: Thargoid Invasion Ships and Thargons The Thargoids are humankind's deadly enemy, and throughout the 8 galaxies there are at least 50 war zones between humanity and Thargoid. This highly technologically advanced insectoid race is also at war with 17 other space- going life-forms.

All Thargoid combateers are ruthless in combat, and some may be comparable with elite-status human combat pilots.

Though most of the Thargoid Space Fleet is currently engaged by the Galactic Navy in InterGalactic Space, a few of the smaller battle ships make occasional destructor-raids into human space. These ships are extremely fast for their size and invariably have anti-missile (ECM) Systems.

Additionally, most Thargoid battle ships carry several small, remote- controlled "thargons", killer-craft each equipped with a single, but highly advanced, pulse-laser. The Galactic Navy are developing their own deep- space RemCraft, and pay a large bounty for any thargon craft that are brought to them.

Thanks.
I never had a manual with my spectrum.
I had to work it all out.

What's this I hear... scripted cut-scenes dealing with Thargoids? Can this be true?
Truth is the daughter of time
Top

You mean the Thargoid scan encounter that has been around for a few months or something new? 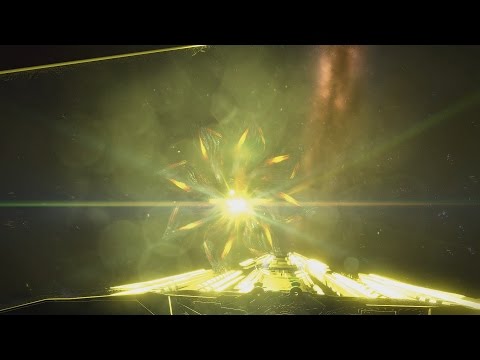 I think the idea so far has been nicely executed, just hope that they can continue maintaining the mystery and tension.
Top

another_commander wrote:You mean the Thargoid scan encounter that has been around for a few months or something new?

I've no idea! <scratches head - grins> I read a post in an ED thread which I don't really follow. There you go!
Truth is the daughter of time
Top

Here is a link to it. It's quite an impressive, although entirely scripted, in-game cutscene. https://www.youtube.com/watch?v=k9gkhvcoheU
Top
Post Reply
2076 posts