My first ship OXP. A work in progress, but here's the first version. I'm adopting the name 'Starship Design Works' for the in character side of my OXPs, let me know if that puts anyone's nose out of joint, I did a search and no results came up for it, so I hope it's ok.

[IC]
The Mamushi is the first public release from Starship Design Works and fulfills the ideal of an ultra light weight, portable and disposable fighter for escort and protection work.

The design is fundamentally 4 engines attached to a central spine, with the main cabin effectively being an escape pod for the pilot. To keep costs down the ship has minimal systems support, with no facility for missiles or ECM (ECM being provided by the mothership). Low yield reactors supply a minimal recharge capability, with no capacity for Quirium based witchspace travel or injectors. There is a single forward mount which can take a low power laser mount (pulse or beam weapons only).

The ships are built around a standard escape pod, with the pilot ejecting for collection by the mothership if the ship is damaged. High speed and manouevrability of the craft make them tough to hit and the low cost means that although individually they are not heavily armed, deployment of large numbers of the craft should be able to see off any pirate and their iron assed ship.

[OOC]
I started off doing some blends for ships and found rounded surfaces are a pain to surface map. So I decided to do something around the standard escape pod as a concept, with massive engine capacity and fairly light weaponry. A real irritating little pain of an escort ship. Currently speed, roll, pitch and yaw are maximums. Those will be tweaked as I work out what's appropriate, as will price and maybe density.

First version is a model, with textures, and basic OXP setup. I've gone overboard with the roles for now, since I want to encounter them a lot and see if they work as an idea. Trying them out, they die quickly, leaving an escape pod, but it's clear I need to work on the behaviours.

Subsequent versions will incorporate feedback, get the ship on the WIKI, and look into behaviours so that these ships will appear as multiples. I.e. if you have a Python with 2 escorts, those 2 escorts might actually be 6 Mamushi.

Mamushi is apparently an oriental pit viper, with brown skin and speckles, which inspired the rusty look of this ship. Speaking as a long time herpetophobe then I haven't dug too deeply, just in case there's pictures


Downloadable (I hope) from
https://www.box.com/s/h85q5mgg1zhyqmo0exxh

Sounds interesting - any screenshots?
Commander Smivs, the friendliest Gourd this side of Riedquat.
Top 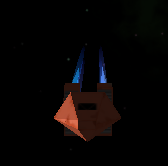 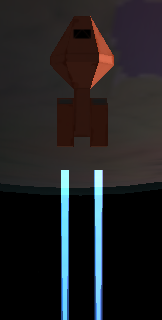 That looks great - odd design but it really works.
Commander Smivs, the friendliest Gourd this side of Riedquat.
Top

Very interesting; seems like the kind of mass-produced defense ship the 249th would be interested in.
Got all turned around, lost my nav connection... Where am I now?
Top