Take care KZ! Hope to see you soon (RL got in the way for a year for me - hope it's not the same for you!)

... but looking forwards to your return

Oh, and I really like the badges now that they have sprouted both wings again! Definitely would like to see them ingame

Hi, I'm just having a quicky squiz at what's happening on BB. Which is a bunch, apparently. Any-ho, did a quick logo mock-up since Ahruman finally let slip on a few details on what he actually wanted, so pay that thread a visit.

I want you folks to have a real think about how you use the electronic documentation you get with software. I'll be posting a link for a on-line survey about the subject, when I find a site that doesn't want to charge for the service. <mutter.> I'll let you know with a new thread about it when it's ready.

Turns out that RL (TM) was kind to me this week.

Given the ++good feedback to the Ahruman response I whipped up on the Oolite Icon Comp' thread, I present to you the iStarbird in all it's many forms.

One thing i've noticed, when the design goes to a >48x48 pixel size, the bird becomes washed out. Add the wormhole behind it and it really pops. Also just for fun I tried turning into a real bird, which doesn't look half bad.

* Turns out I should be able pop in about once a week till xmas. After that, I could be pulling 80 hour weeks (40 working + 40 studying if everything goes to plan.) so who knows.
KZ999's Oolite documents, including the new draft Oolite Game Manual, can be found at www.box.net
Top

Regards
Their dreams a tattered sail in the wind
Top

Personally, I really, really like the second bird from the left!

And you can quote me on that!

Kaks wrote:Personally, I really, really like the second bird from the left!

I've muttered that phrase in a few gin joints in my time.
Their dreams a tattered sail in the wind
Top

Once again KZ drifts through the bb and drops off another doodle after the request for a realistic bird.

I though I might try taking the logo away from the classic design and this is what I cam up with. The discs at the top are meant to be a sun and planet while the disc the bird is holding is a wormhole witchcloud. I'm not too sure about them so voice an opinion.

BTB, is there a boot print on my ass

. Seriously, I'll have to pick up my game after McSpider's entry in the compo' thread. I love a challenge

<Rubs hands while laughing like a Bond villian.>
KZ999's Oolite documents, including the new draft Oolite Game Manual, can be found at www.box.net
Top

Personally, I don't like either of them.
I think they remind me of an airline logo, but I can't place which one.

From the previous batch, I'd like to see the "real bird" with talons holding a scroll or something saying OOLITE, and a wormhole behind it.

You're right about the small designs needing the wormhole behind them.


Regards
Their dreams a tattered sail in the wind
Top

I know it's the opposite of the flow, just an idea..

Can't remember where I got the font, but it was a free site
Top

Personally, I don't like any of the real birds.

The second doodles KZ remind me of Zak McKracken somehow, and the first real bird of a cartoon animation, not a spaceflight game. The bottom wormhole also looks more like it pops up from the webpage than a several lightyear-deep hole.

I like the top right the most in terms of texture, and would prefer it coupled with the shape of the second row instead of the word over a wormhole. So a topright and middle right combination.

ZygoUgo wrote:I know it's the opposite of the flow, just an idea..

Can't remember where I got the font, but it was a free site

Oddly, this is familiar to me, as if it were from an old dream, but I can’t exactly remember. 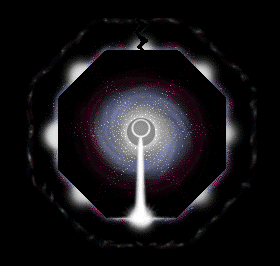 Ooh yeah, what's that from?

Missed that one, or if you're feeling sentimental..
http://www.abandonia.com/en/games/24624 ... andal.html
Hmm, they don't seem to have the Mac version.
http://marathon.sourceforge.net/
Top

Marathon... first game that put production in my old company to a halt. Sweet memories (of burning sprites flying around after wisely placed nuke)...

Perhaps it would be best to move away from insignia that looks like the original Elite logo.

Maybe we could have a simple badge that's built upon for every level?