Just for visualization purposes, here is a redo of the previous MorayMED shot, this time with a slightly different spec/gloss map, aimed at toning down the pitting effect a bit. How your surfaces look is up to the artist creating the materials. 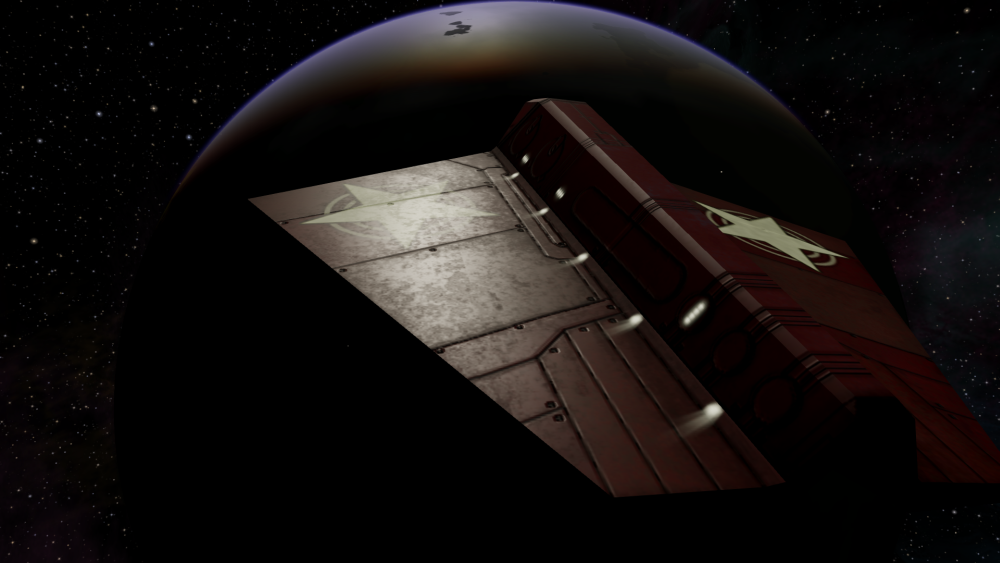 And here is the side by side comparison:

And the spec/gloss maps used respectively (download from here and here to preserve the alpha channel data, links valid for one week from date of this post): 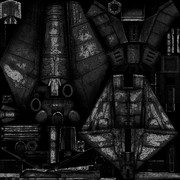 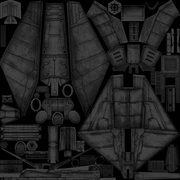 another_commander wrote: ↑Fri Mar 13, 2020 6:55 am Just for visualization purposes, here is a redo of the previous MorayMED shot, this time with a slightly different spec/gloss map, aimed at toning down the pitting effect a bit.

I was doing a test run of a new HUD / kinda just messing around in G3 on my main save. It'd been a while since I had played normally. While flying a passenger contract, I ran in to these blokes: 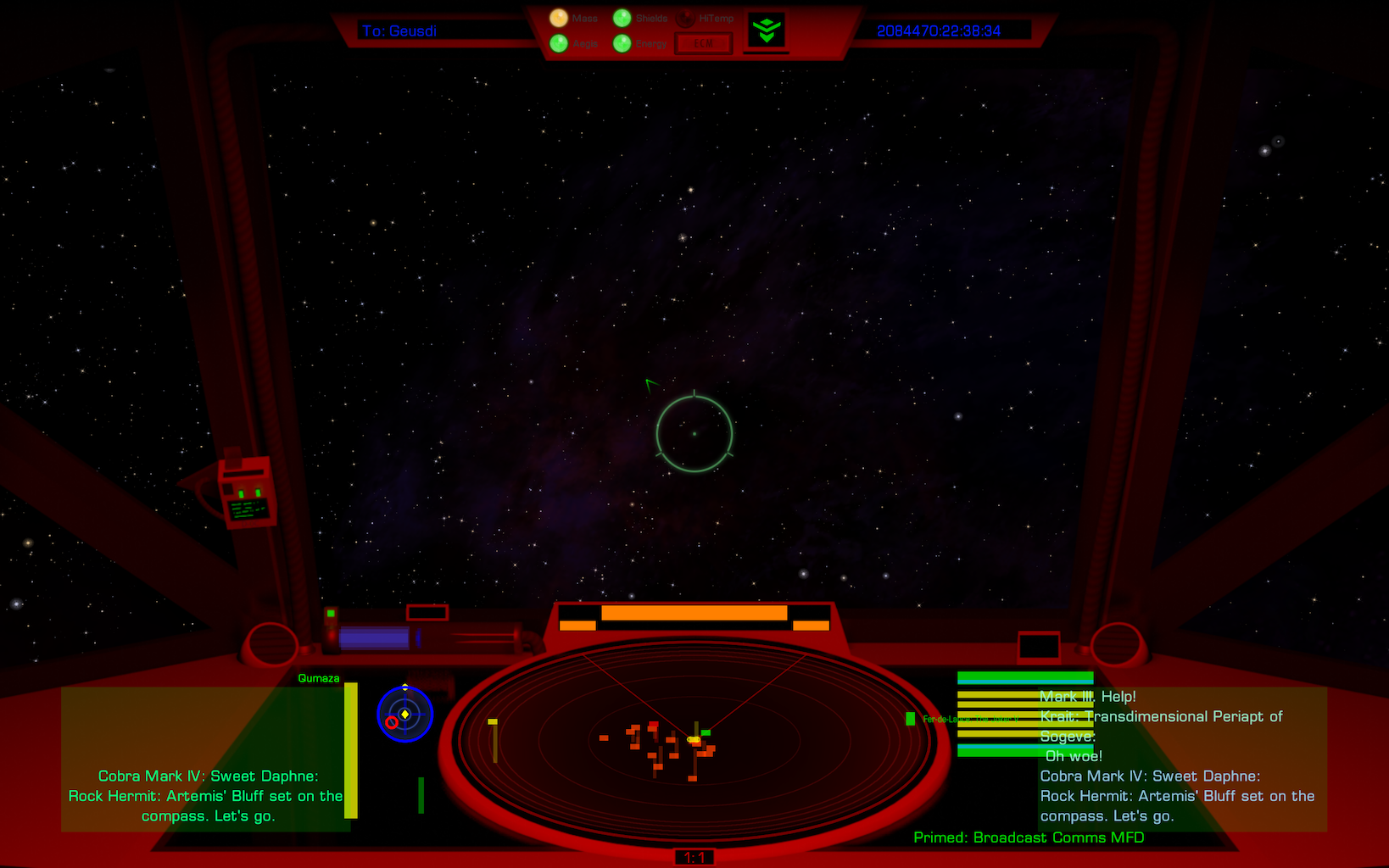 I haven't bothered to count, but seems like that's a whole lot of ships... Still wasn't too difficult, though. 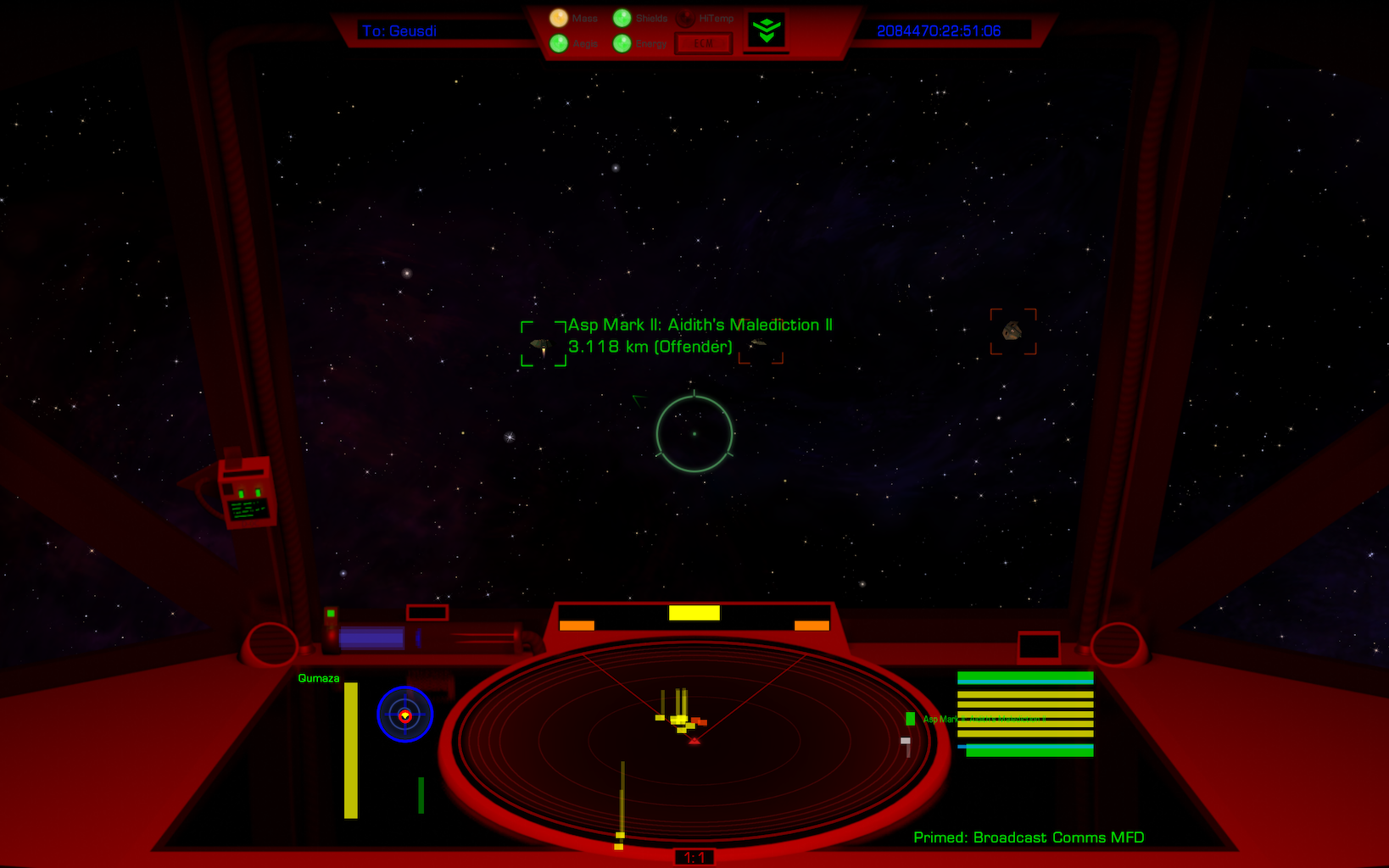 The last three. (I thought they were all assassins, but maybe some pirates jumped in? Can assassins be offenders?) 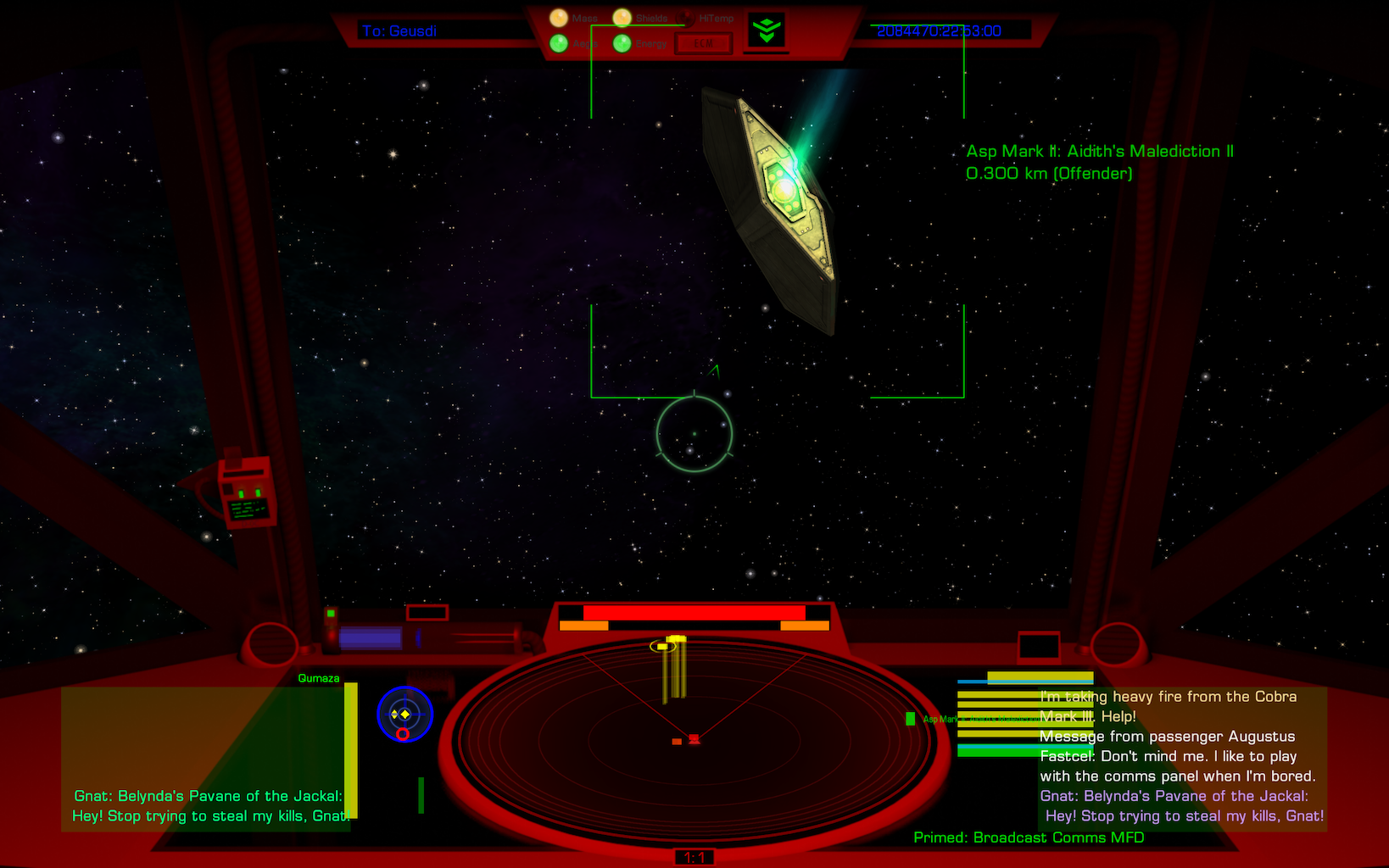 A funny coincidence: my audio glitched out, and then the passenger said this... (second message up) Playing with the comms, indeed. 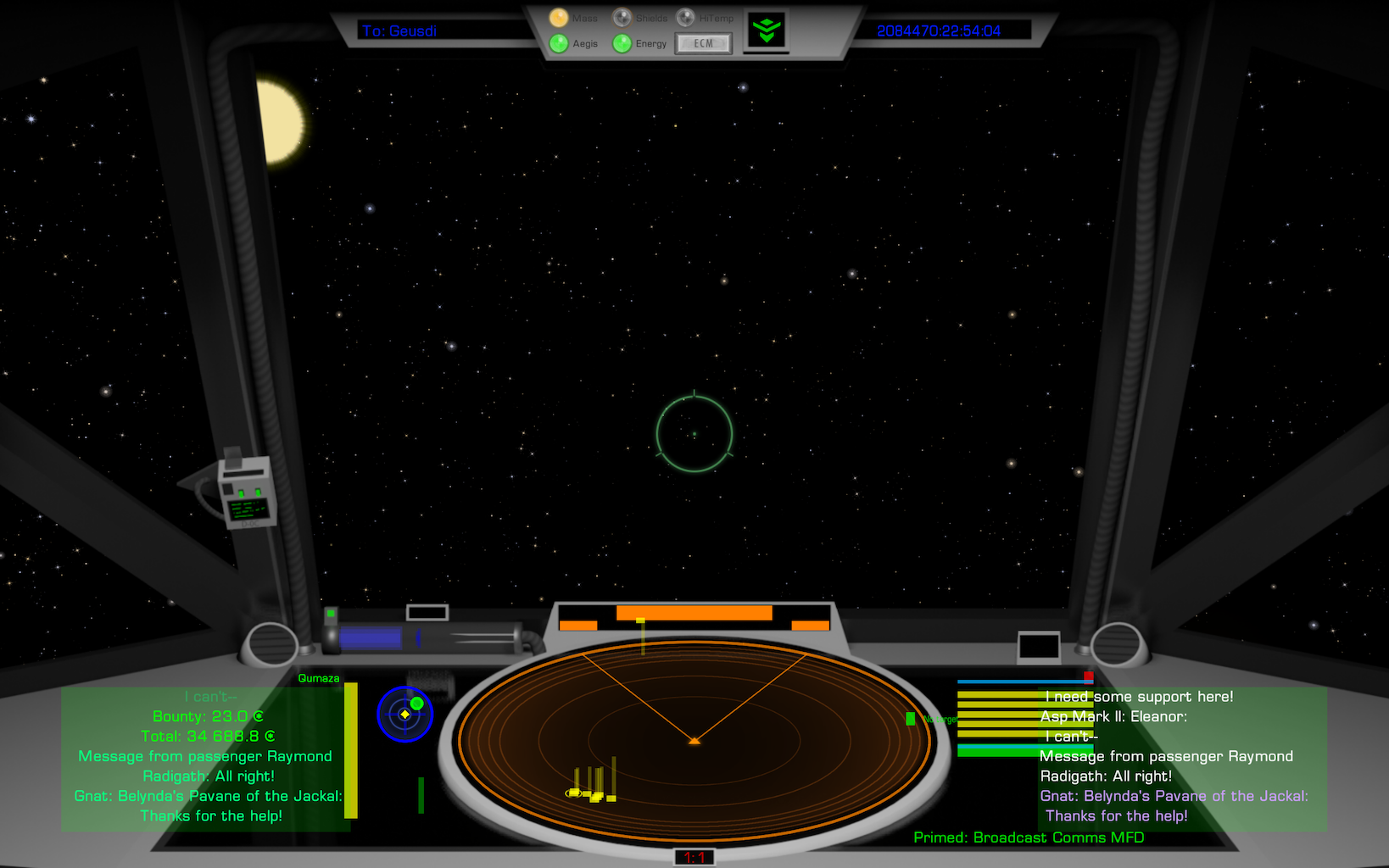 All done. Around three escaped. 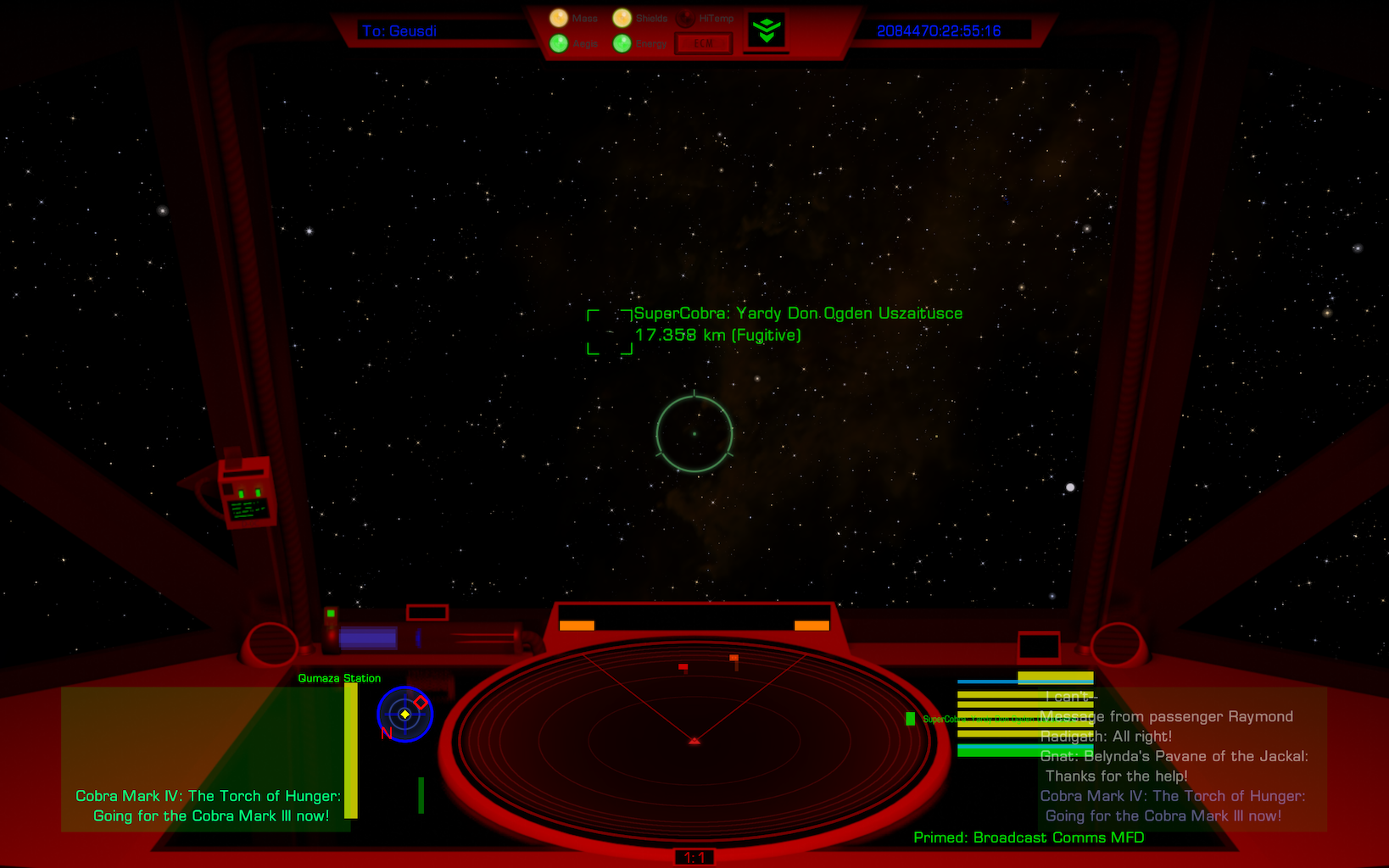 Then I ran in to a SuperCobra. Now that was a tough fight. Oh, the joys of Anarchies.

Obviously, I had some OXPs installed that made it harder (Ship Configuration, Random Hits, Skilled NPCs, etc.), but I know that without the well-equipped Cobra III I have, that fight would have been a lot more difficult. While perhaps fun for someone who's been playing for a while, this is definitely not a situation you'd want to throw at someone new to the game. In this case, however, the game balanced itself very well with the contract assassins: as you accept more contracts (and presumably gain more kit and experience), the difficulty goes up. A nice little feature.
Last edited by GearsNSuch on Wed Mar 18, 2020 11:20 am, edited 1 time in total.
Top

Tales from the spacelanes would suit. Report the post and ask a kindly moderator to move it, perhaps?
I dreamed I saw the silver spaceships flying, in the yellow haze of the sun
There were children crying and colors flying, all around the chosen ones
All in a dream, all in a dream, the loading had begun
Flying Mother Nature's silver seed to a new home
Top

As a demo of a new HUD, I think the images are fine.
My OXP's
YouTube: Oolite Teaser Trailer
Top

I would agree with phkb here. GearsNSuch's post contains some nice screenshots and, as such is not out of context for this thread so I would be OK leaving it as is. @GearsNSuch, if you absolutely still want your post moved out, let me know
Top

Being in quarantine results in free time to take on some side projects. This one is for gsagostinho: Specgloss maps for the Asp and the Fer de Lance. Here we go: 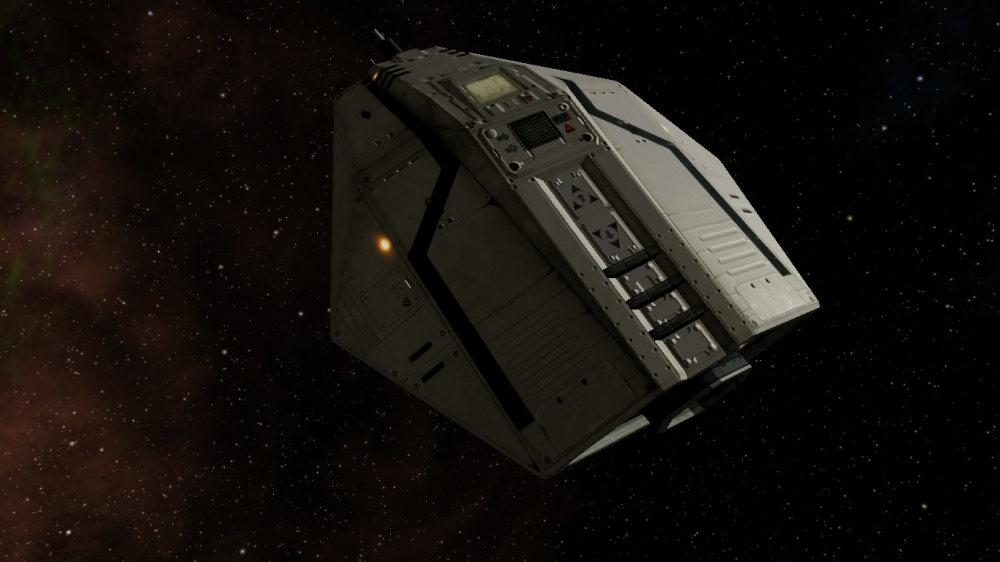 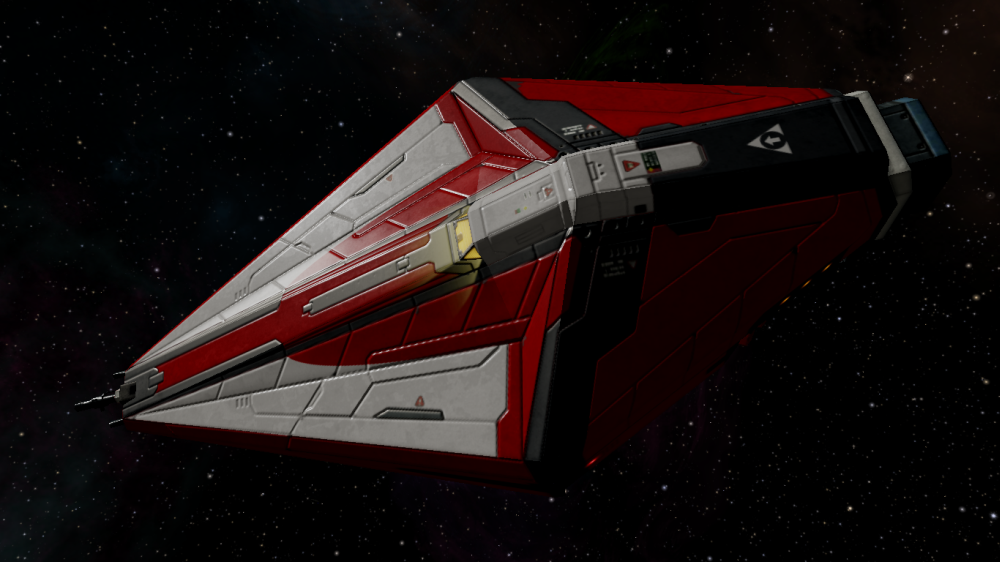 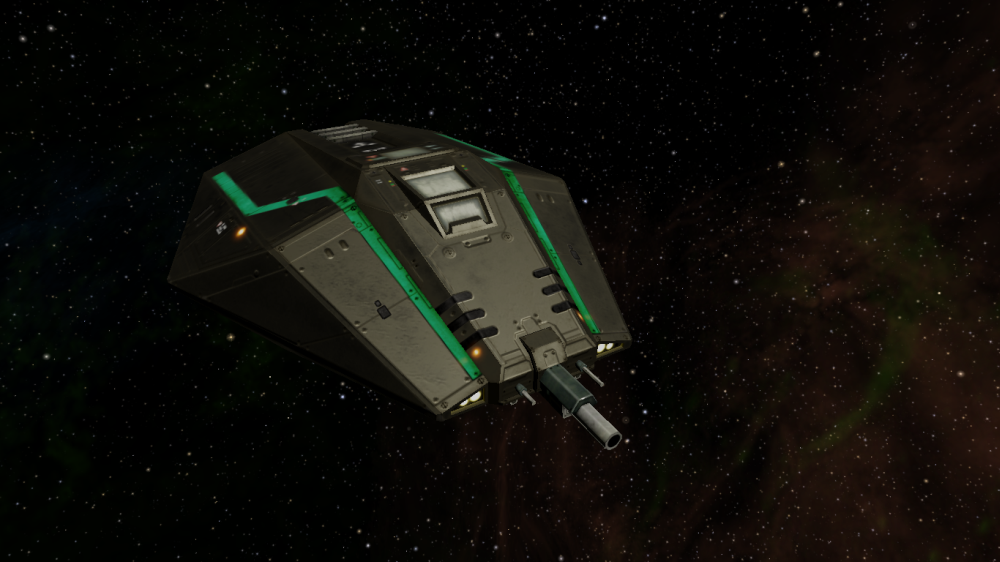 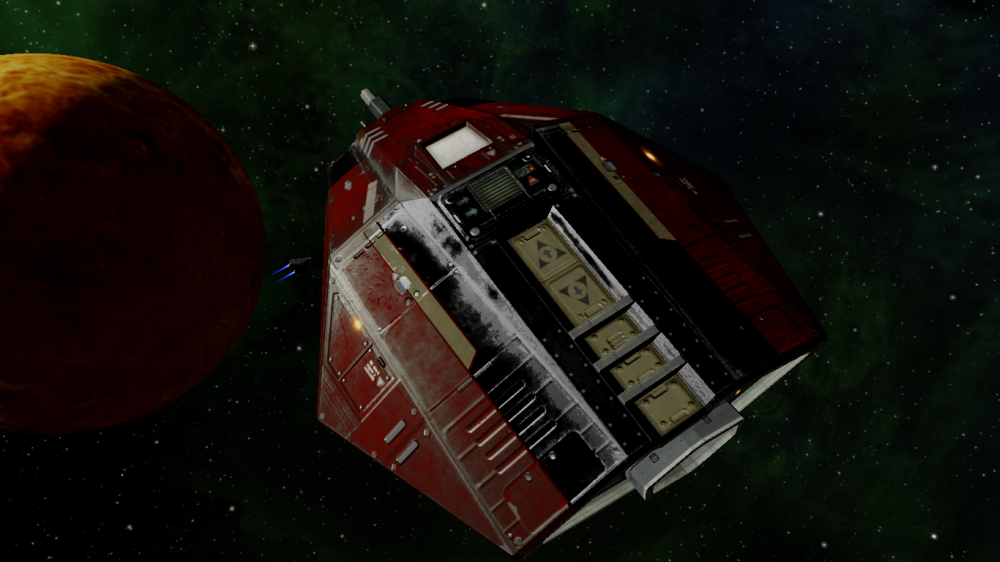 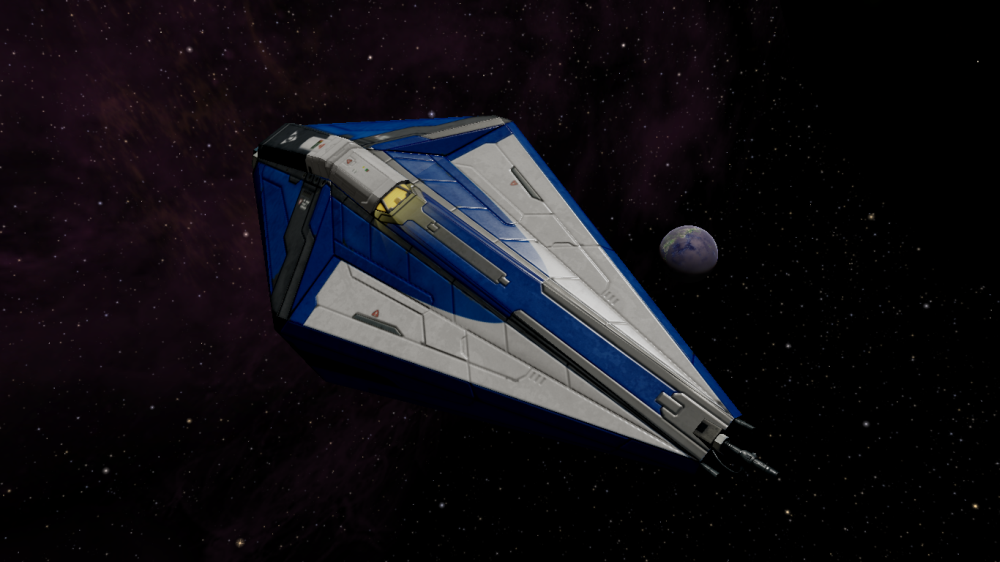 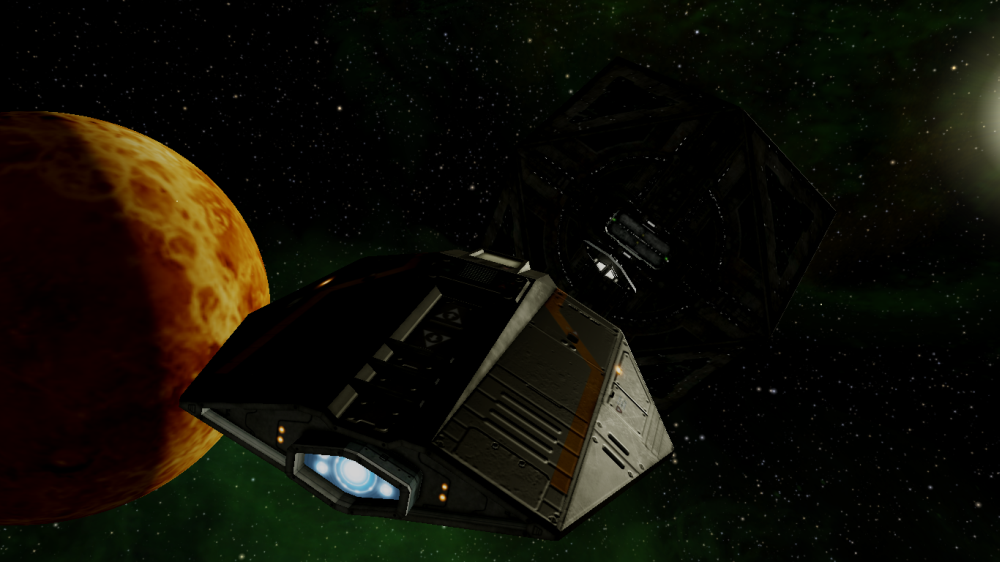 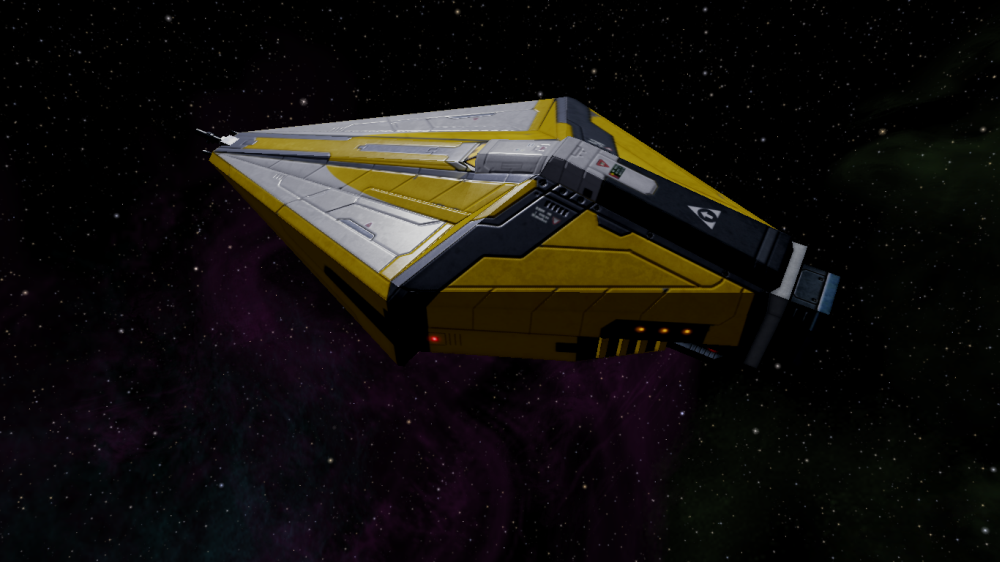 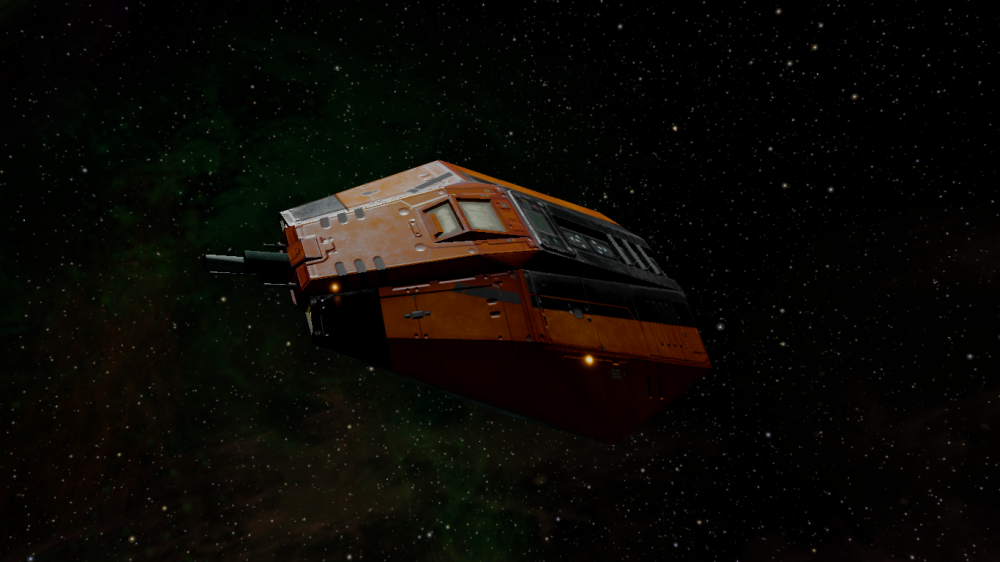 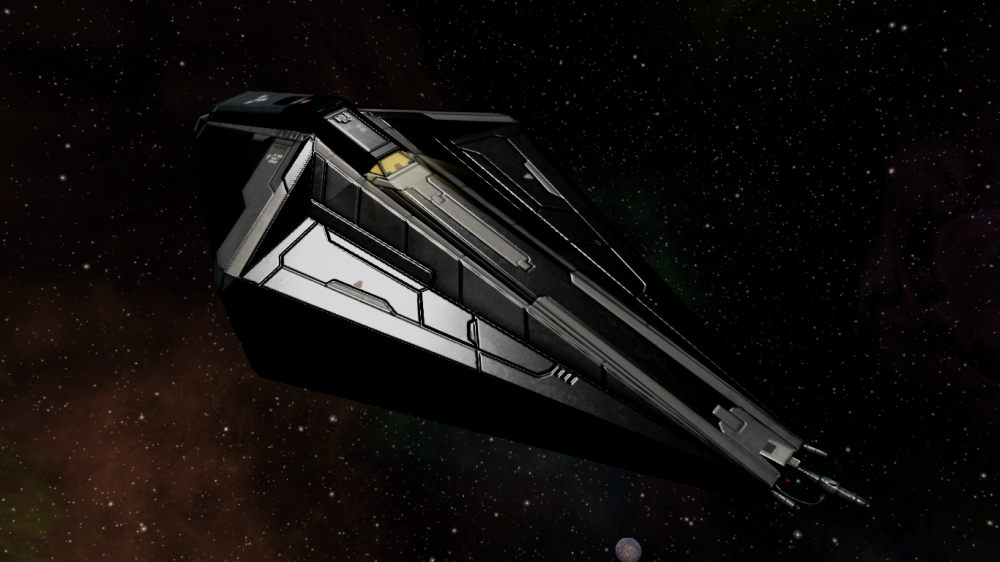 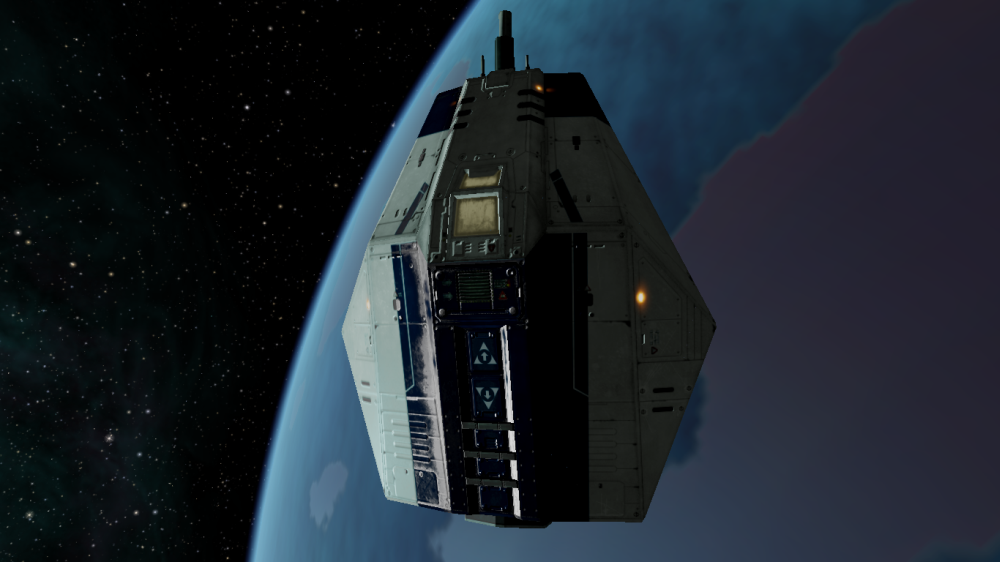 The specgloss maps can be obtained from here: https://drive.google.com/file/d/1NL68hO ... sp=sharing
Top

I can include them into the OXPs if you would like. Besides dropping these files in the respective texture folders, what config changes do you need to make? As for the Asp, do you need to create specgloss maps for each different livery?
Top

I can include them into the OXPs if you would like. Besides dropping these files in the respective texture folders, what config changes do you need to make? As for the Asp, do you need to create specgloss maps for each different livery?

You can certainly include them if you want to. Apart from dropping the files in the Textures folder, you also need to add this entry in shipdata.plist, inside the materials hull section of the entries of interest:

and also set the gloss value to 1.0, so that the game reads gloss values straight from the gloss texture. If you want to reduce gloss, you can do that by changing the 1.0 to a lesser number and the map's gloss values will be multiplied by that number. So, for example, the FDL shipdata materials entry should look like this:

As for the Asp, I think there are two designs: one with the entire back painted differently and one with the lines, like in the first pic above. The maps I linked to should be enough for all the liveries, but you can of course make more, with different spec/gloss specifications for more variety.
Top

Great, thank you so much. I will take a look at this as soon as I can. These last screenshots are looking really good!
Top

Reminds me of the pic from the Elite manual 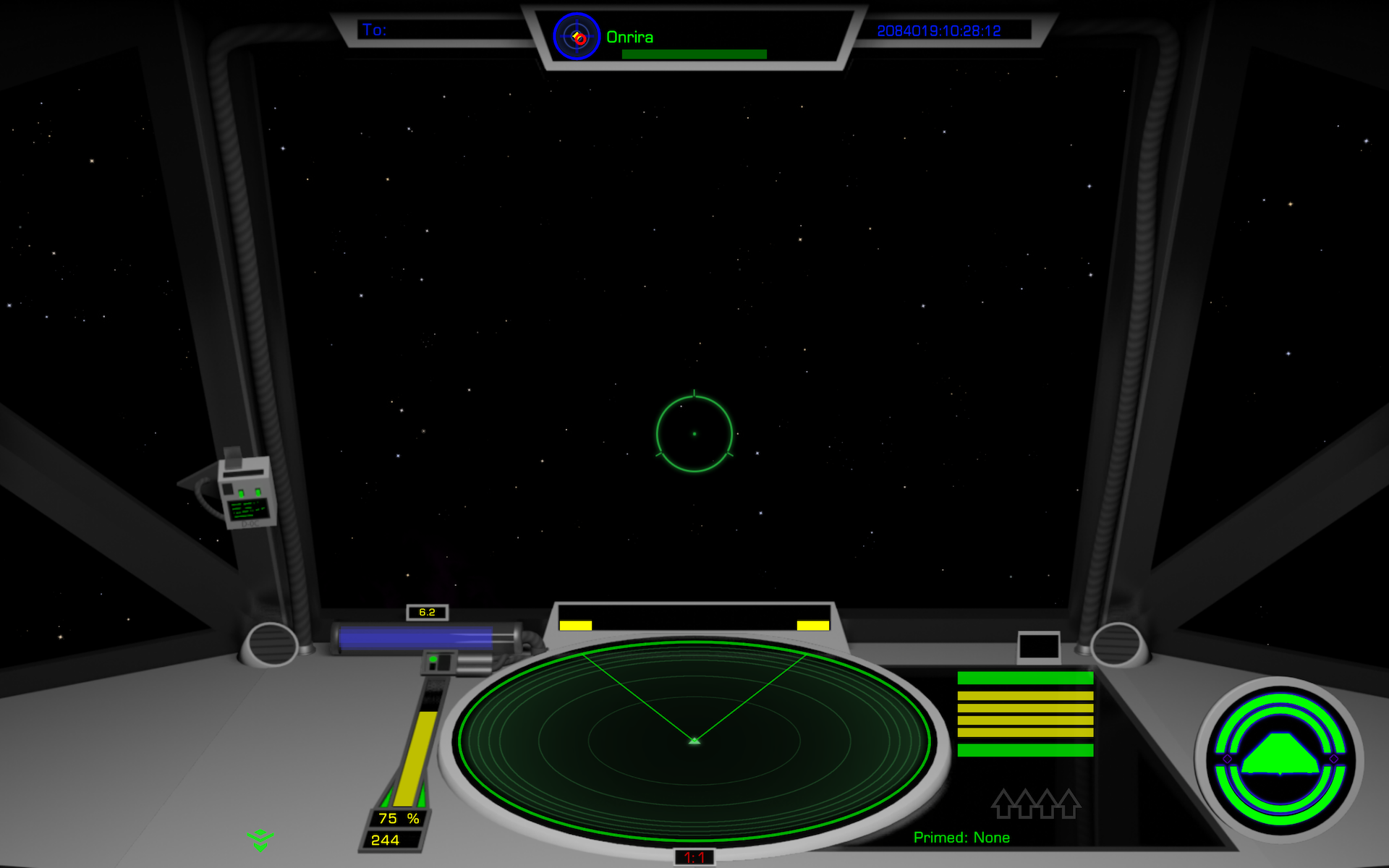 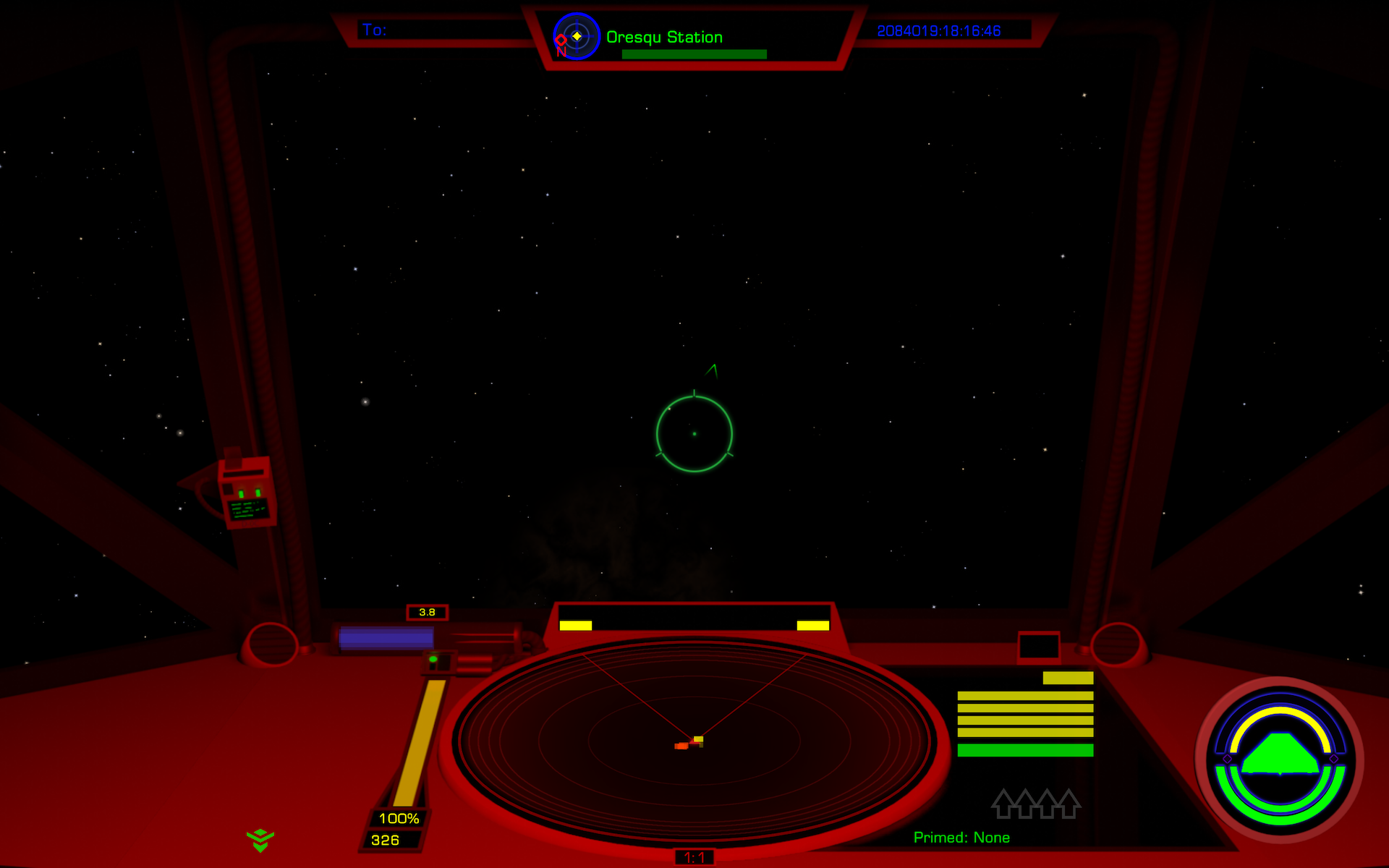 Was dropping by.. The graphics are nice today in 2020 in Oolite. I am lost entirely in No Mans Sky these days but still drop by to see the advances in Oolite on a half year bases. Yeah I know thats not high frequency. Hope you all doing well. I even played Oolite some time ago. It still is THE best Elite clone.
For P.A. Groove's music check
https://soundcloud.com/p-a-groove
Famous Planets v 2.7. (for Povray)

Hi pagroove! Nice to see you around again.
Top

Still use some of your music in the game on occasion

- - - Game too slow for you? Masslock Compensators - - - Trouble getting out of trouble? Indestructible Injectors
Top
Post Reply
5752 posts